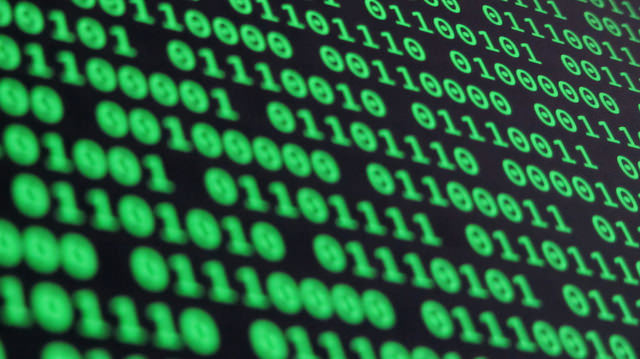 The world is made up of $10$ kinds of people, those who understand binary and those who do not. These different kinds of people do not always get along so well. Bob might ask for a $10000$ ounce coffee (meaning binary) and Alice might make misinterpret his request as being in decimal and give him a $10011100010000$ ounce coffee (binary). After Sue explains that this much coffee costs $100$ dollars (decimal), Bob might assume he only has to pay $4$ dollars (interpreting the price as being in binary). In response to these differences that are difficult to resolve, these two groups have divided the world into two regions, the binary-friendly zones and the decimal-friendly zones. They have even published a map like the following to help people keep up with where the areas are (they have used ones and zeros so nobody would have trouble reading it).

For each query, output binary if a binary user can start from location $r_1, c_1$ and move to location $r_2, c_2$. Output decimal if a decimal user can move between the two locations. Otherwise, output neither.